CANCER that originates from lung cells is called a primary lung cancer. Cancer may spread to the lung from other parts of the body commonly from breast, colon, and thyroid glands.

Lung cancer is the leading cause of cancer death in both men and women. It occurs most commonly between the age of 45 to 70 and has equally prominent amongst women. 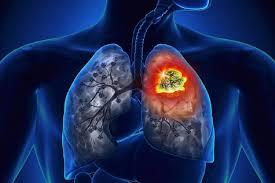 There are two main types of lung cancer

Non-small cell lung carcinoma: About 85% of the lung cancer is of this type. This type of cancer grows more rapidly than small cell cancer. By the time the time lung cancer has been detected it has probably spread to other part of the body. Therefore it is very much important to get a regular body checkup.

Small cell lung carcinoma: also called oat cell carcinoma, this cancer accounts for about 13-15% of all lung cancers. It is very aggressive and spreads quickly. 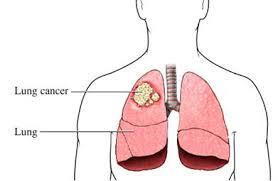 Symptoms of lung cancer depend on its type, its location and the way its spread.

One of the most common symptoms is a persistent cough for a long time. Some people cough up blood or sputum streaked with blood. Rarely, lung cancer grows into an underlying blood vessel and causes severe bleeding. Additional nonspecific lung cancer includes loss of appetite, weight loss, fatigue, chest pain, and weakness.

Swollen lymph nodes above the clavicle

Abnormal sounds in the lungs

Weakness in one arm

dilated veins in the arms, chest, or neck.

Swelling of the face

Imaging Tests Once lung cancer begins to cause symptoms, it is usually visible on an x-ray. Occasionally, lung cancer that has not yet started to cause symptoms is found on a chest x-ray taken for another purpose. A CT scan of the chest may be ordered for a more detailed examination.Other imaging techniques such as  PET scans, bone scans, and either an MRI or a CT scan of the brain can detect cancer elsewhere in the body.

Bronchoscopy  With the patient lightly anesthetized, the doctor guides a thin, lighted tube through the nose or mouth and down the air passages to the tumor site, where a small sample of tissue can be removed. This is called a bronchoscopy, This is useful for tumors near the center of the lung. 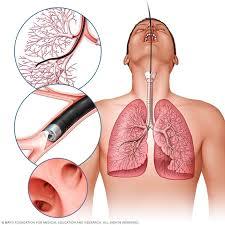 Lung biopsy  and Lymph node biopsy. Although tests of mucus or lung fluid can reveal fully developed cancer cells, the diagnosis of lung cancer is usually confirmed by lung biopsy.

Lung cancer sometimes may cause blockage of an airway due to tumor which could collapse a part of lung. Shortness of breath and pneumonia, coughing, fever, and chest pain could be severe complicates symptoms at the last stage of cancer.

Lung cancer may grow into the heart causing abnormal heart rhythm, heart failure and several other heart disease. Once the cancer cells travels through the blood stream it spreads to the different parts of  body, most commonly the liver, brain, adrenal glands, spinal cord, or bones.

The staging of cancer indicates how far it has spread through the body and its severity. This classification helps clinicians support and direct treatment for the best results.

Each stage determines whether cancer has or has not spread or has spread to nearby lymph nodes. It may also take into account the number and size of the tumors..

Staging for lung cancer is extremely complex and extensive with several sub-groups within each stage.

Staging definitions may vary, but doctors typically stage non-small cell lung cancer using the tumor size and the spread to guide them in the following way:

Small cell lung cancer has its own categories, limited and extensive, referring to whether cancer has spread within or outside the lungs.

Treatments for lung cancer depend on its location and stage, as well as the overall health of the individual.

Surgery and radiation are the most common approaches to treating lung cancer, but other treatments are also available. For example, doctors often treat small cell lung cancer with chemotherapy.

Surgery: A doctor may operate to remove cancerous lung tissue and tissue in the surrounding areas where cancer may have spread. This sometimes involves removing a lobe or large segment of the lung in a procedure called a lobectomy.

In severe cases, the surgeon may remove a lung in its entirety. A person can live without a lung, but being in good health prior to surgery helps to improve outcomes after lung removal.

Chemotherapy treatment has a more significant impact on cancers that have spread to different parts of the body and require a body-wide attack.

However, chemotherapy is a powerful intervention and can have side effects including extreme nausea and weight loss.

Radiation therapy: This approach uses high-energy rays to kill cancerous cells. A doctor may also use radiation to shrink a tumor before removing it surgically.

Radiation therapy is mainly useful on cancers that occur in one location and have not spread.

Targeted therapy: This is the use of particular medications that specifically target a particular behavior in cancer cells. Examples include medicines that stop cancer cells from multiplying. 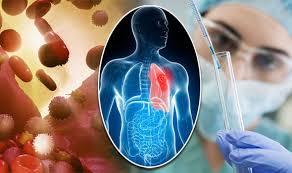 Lung cancer treatment often involves the collaboration of medical experts in many areas. These specialists may include:

WHAT IS THE BEST WAY TO PREVENT LUNG CANCER?

The best way to prevent lung cancer is not to smoke cigarettes or to quit smoking if you are a smoker.

Lung cancer is a serious and potentially deadly disease that affects a person’s ability to breath.

However, early diagnostic screening of individuals who are at high risk for lung cancer can help them receive treatment in earlier and more treatable stages. The size and spread of cancer determine people’s outlook.

Treatment options include surgery to remove sections or all of the lung, chemotherapy, and radiation therapy, as well as targeted drug therapy.

If a person has concerns that they could be at risk for lung cancer, they should talk to their doctor.