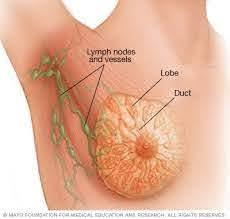 What is Breast Cancer?

As with all types of cancer, breast cancer is made up of rare, uncontrollably developing cells. Also, those cells may travel to places in your body where they are not found normally. When that happens, it’s called metastatic cancer.

Breast cancer usually starts in a small, confined area of the glands producing milk (lobular carcinoma) or ducts (ductal carcinoma) that carry it to the nipple. It may grow larger in the breast and spread to other organs through channels to nearby lymph nodes or through your bloodstream.

Who gets Breast Cancer?

Men can also have breast cancer, but they account for less than 1% of all cases of breast cancer. Among women, breast cancer is the second most common cancer diagnosed after skin cancer in women, and the second leading cause of lung cancer deaths.
An average 1 in 8 women in her lifetime will develop breast cancer. About two-thirds are 55 or older women with breast cancer. The remainders are mostly between 35 and 54.

Fortunately, if early breast cancer has been found it is very treatable. Localized cancer (which means it hasn’t spread beyond the breast) may typically be treated safely before the cancer spreads. A woman with localized breast cancer is about 99 per cent as likely to live for at least five years after a diagnosis. Once the cancer starts spreading, treatment gets more extensive.

It can often take years to control the disease. Enhanced screening tests and treatment choices indicate that about 8 out of 10 women with breast cancer will survive after initial diagnosis for at least 10 years.